A game inspired by Pokemon and to a lesser extend by other games that are part of the genre, like Monster Rancher.

Monimal Rancher has a combat system similar to the one used in the main Pokemon games, but with a few twists, like a Monimal having two Abilities instead of one, and Stamina instead of PP.

It will also feature a breeding system that allows you to customize each Monimal to your liking. You don't like that your Monimal does not have the Water element? Breed parents who are, and your new Monimal might just have the element you're looking for.

This is a turn-based combat system with each Monimal having one element, which are strong, neutral and weak against other Elements. Each Monimal also has two Abilities. One is unique to each species, while the other is a general Ability which is randomly generated when it spawns in the wild or is inherited from one of its parents during breeding.

Using a Move uses up Stamina which, when empty, make you take damage each time you use a Move, which makes Stamina management quite important.

During wild battles, you can also attempt to capture a Monimal for your own party or for breeding purposes. 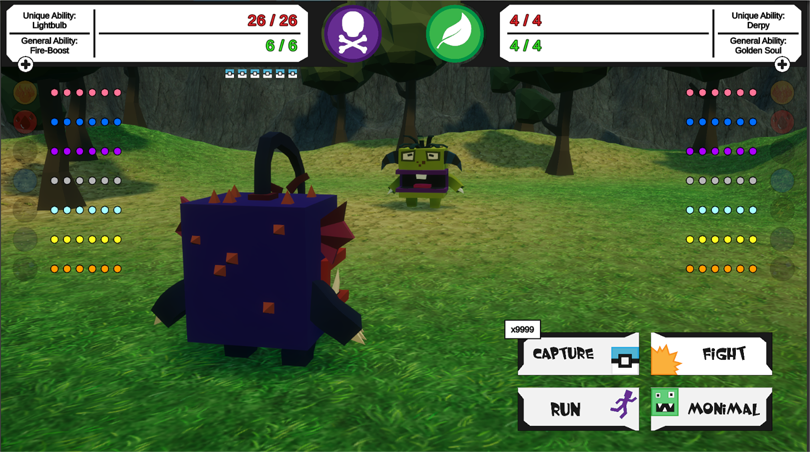 Breeding allows you to customize each Monimal to your liking!

The child randomly inherits the traits from either parent. For example, it could inherit the Element from its mother and inherit the General Ability from its father.

Monimals don't level up the traditional way. To increase the stats of one, you have to earn and spend Training Points (TP for short). The level of a Monimal is the total of all stats combined.

This means that you have perfect control over the build of each Monimal. Do you want a defensive tank that can handle any punishment? Invest in Defense and Resistance stats, as well as Health.

Since a Monimal can only use four moves at the same time, you have to find moves that complement your particular build, or base your build around those four moves. But with over 130 general moves which are open to every Monimal and 104 unique moves (two unique moves per species), this should be no problem.